Embracing Your Inner Noob in The Skyways

When KingsIsle hosted “Look-Alike Day” I needed to start a brand new (noob) baby pirate and I had a blast going through the tutorial again. I hadn’t seen these wonderful scenes since Pirate101 started two and a half years ago.

So many times I hear the word “Noob” used as a great insult not only to someone they deem clueless but anyone a bully does not like or loses to and starts trying to hurt feelings by calling someone a “Noob”. I personally wish to change this attitude. Being a noob is not a bad thing. Just like ignorance is not a reflection on someone’s intelligence, just what they have or have not yet learned. A noob is just someone who is new to the game, a newbie.

I think some of my best times in games are when I am very new to it. There is nothing like that rush of excitement you feel when you enter a new world for the first time and you begin the process of exploration as you learn the new rules and tricks to succeed there.

A lot of time and effort from some very talented individuals went into the tutorial, which is the first thing a new pirate will see to introduce them to the great and beautiful skyways of the Spiral. I decided to bring you along with me as I shift into noob mode and re-experience, (with a bit of artistic license added just for fun.) the joys of discovering how to be an Armada thumping, noble Pirate with a heart of gold. 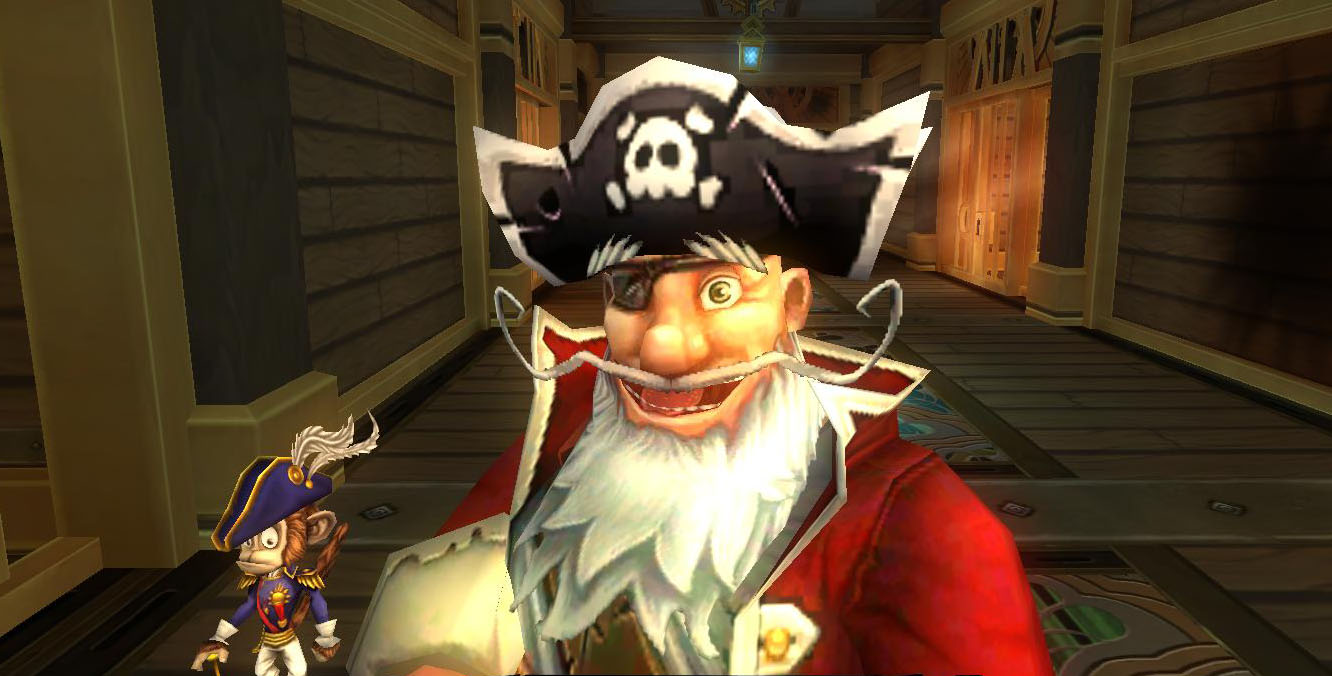 My journey begins with hearing Boochbeard and Gandry talking each other as they are searching for a very special pirate. Any wizard that has completed the B.O.X.E.S. event will know that The Professor himself gave them the mission to find this special pirate ”that would someday defeat the Armada”. 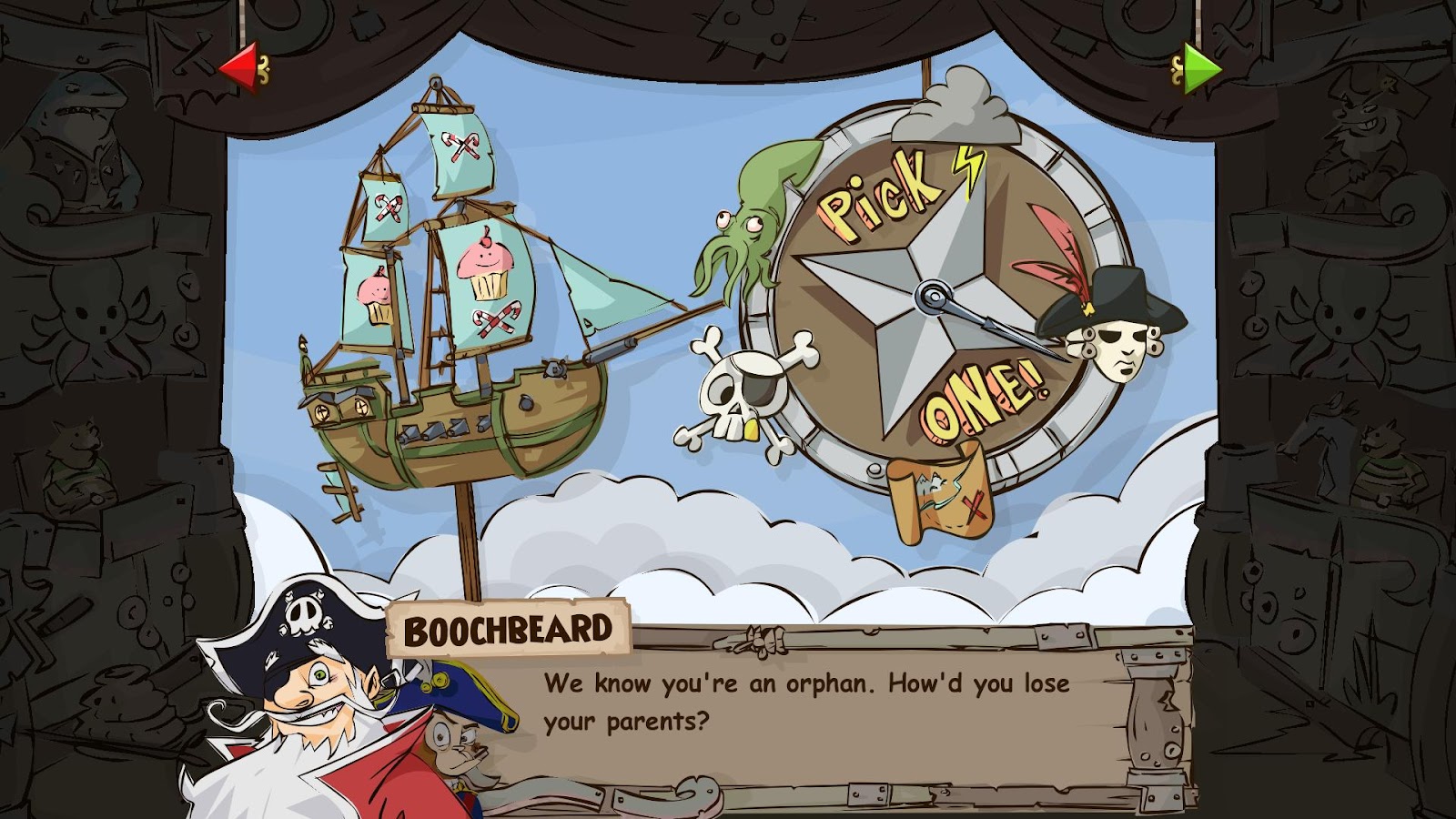 I get to go through the fun of selecting what kind of pirate I will be and what my ship’s flag will look like, along with what colors it will fly. This color and pattern will also be the standard others will see on the mainsail of all ships you will be sailing. This color business is important as it will be the colors my crew will wear throughout the game. One important decision is how my parents die as that will determine which companion I will receive at the end of my Presidio quest.

I am also presented with the first of the game’s many delightful Puppet Shows that explain so many things and give subtle clues to Pirate101 lore that are hidden in them.

Choosing how I got into trouble with the Armada matters as my pirate will receive a boost that can be very helpful depending on which class I am going to have my pirate learn.

The first time I went through this I had no clue what meant what and made some silly choices but now I am not so clueless as to the cause and effect of my decisions.  It is why it is a good idea to read up a bit on any game you begin so that you will have enough knowledge to make the right startup choices. I (hopefully) pick all the right options and a new Swashbuckler is born.

I try to make my gamer characters’ names mean something and connection to literature is one of my favorite ways.  I was going for the Jellicle Cats from T.S. Eliot’s Old Possum’s Book of Practical Cats and this was pretty close. The flag icon seals the deal. 😀 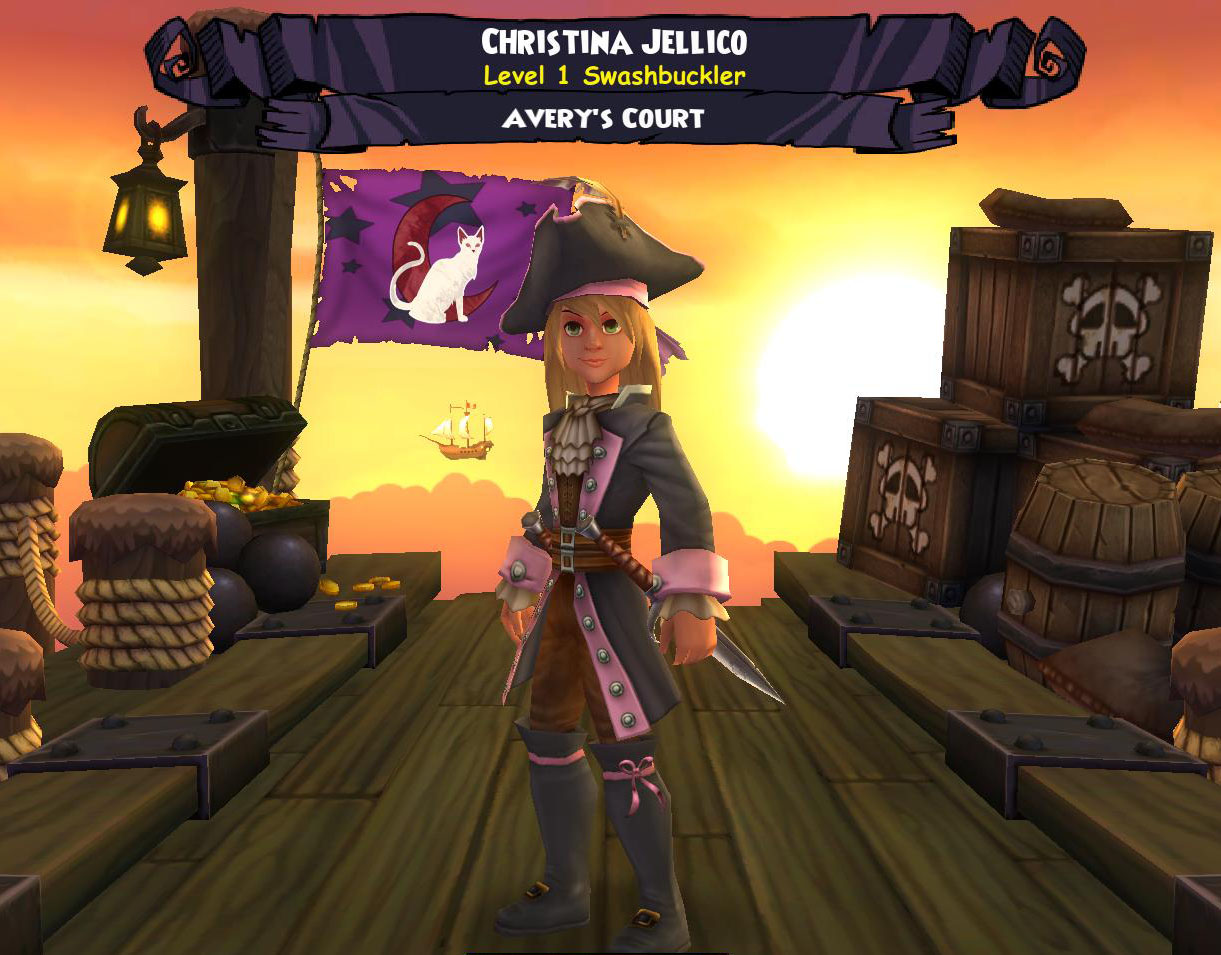 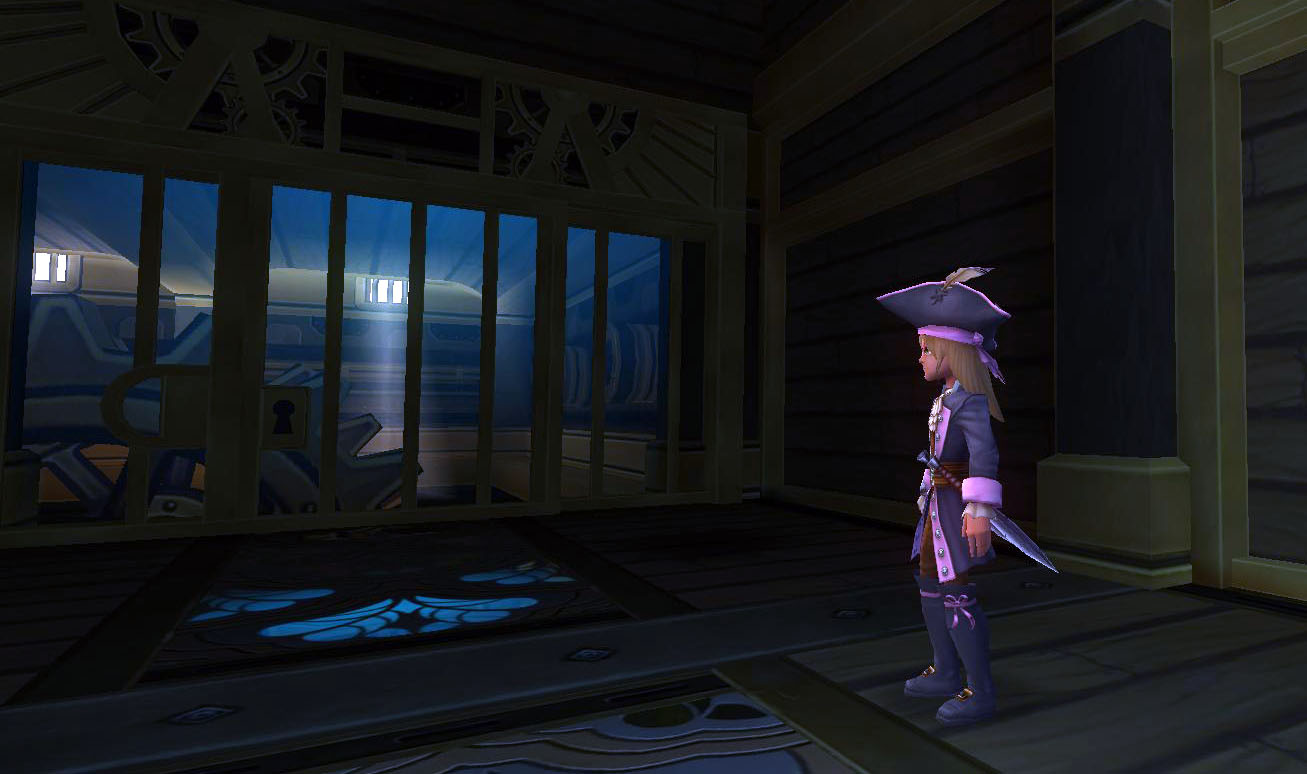 Exploring was something I didn’t do the other times through this tutorial and there are some neat things down here. I mean, how often will I get the chance to examine the inner workings of an Armada vessel? 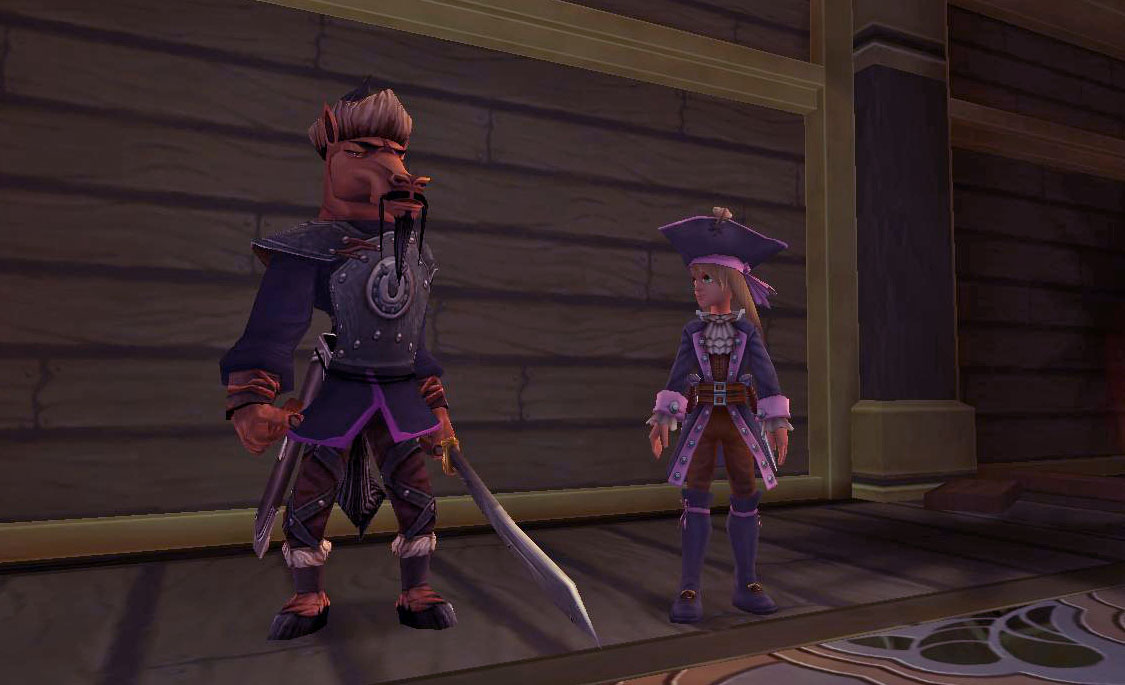 After poking around some more I discover another prisoner and am artfully coached by the game how to rescue him and I am rewarded with my very first crewmate. As I am a Swashbuckler my new first First Mate is Subodai a very tough looking Horse Barbarian.

Subodai very politely introduced himself and as he spoke his name I realized that I had really been butchering it’s pronunciation for years lol.  He graciously informed me that it is pronounced “Sue-Bo-Dye”. I practiced enunciating it several times and hopefully the phonics lesson will stick. 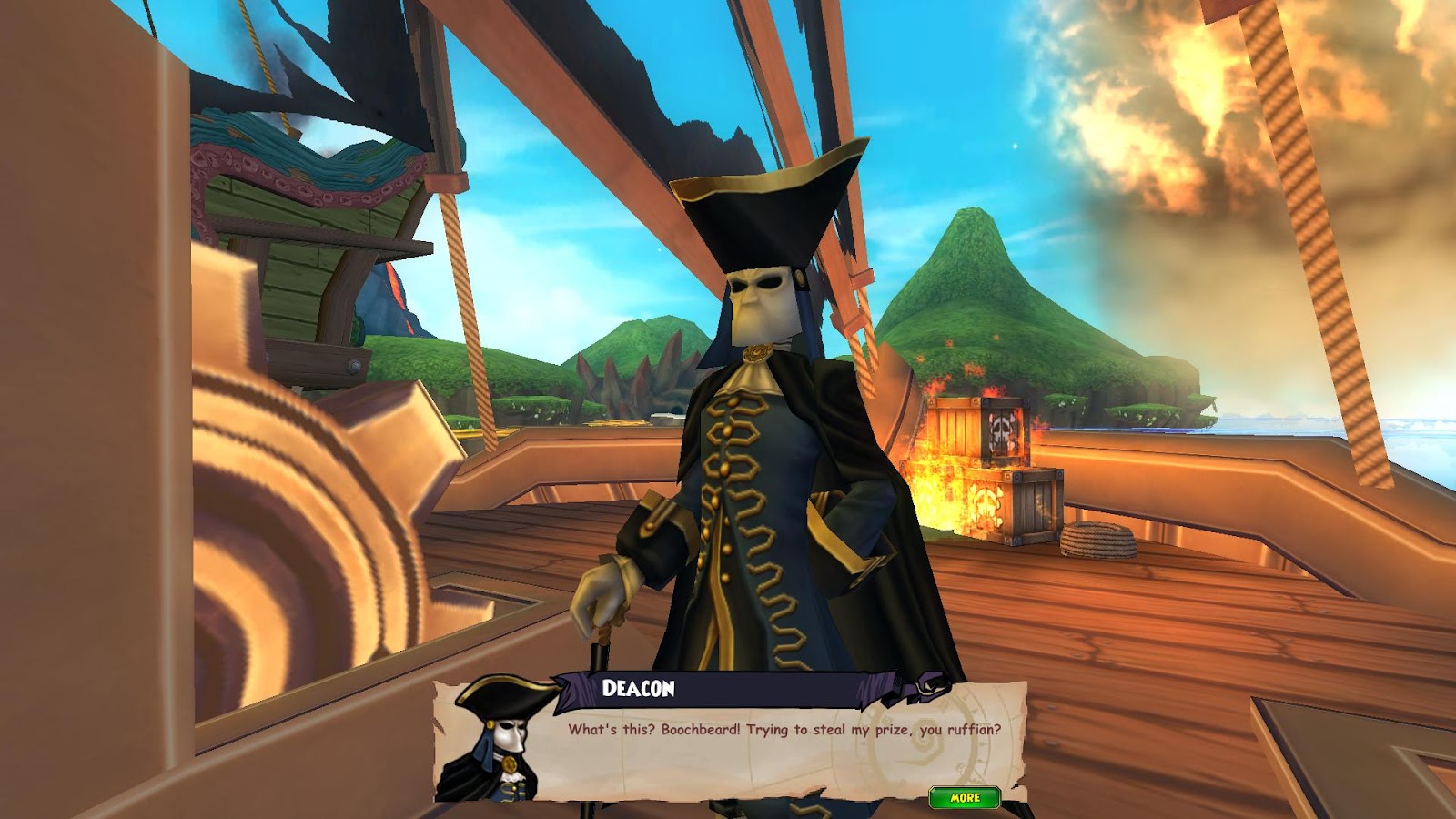 More explosions ensue and Boochbeard declares that  we must get going NOW and he rushes from below decks with a command to follow. As they had just rescued us, it DOES seem the logical thing to do. We dash up the stairs and straight into the clutches of the dreaded Armada Elite Deacon!

“Ruffian”?  That’s the best you could come up with?

Hmmm Deacon called me “his prize”. I wonder if there is some merit to this “Chosen One” thing?  At least Deacon, Boochbeard and Gandry seem to think so. We shall see how things play out. 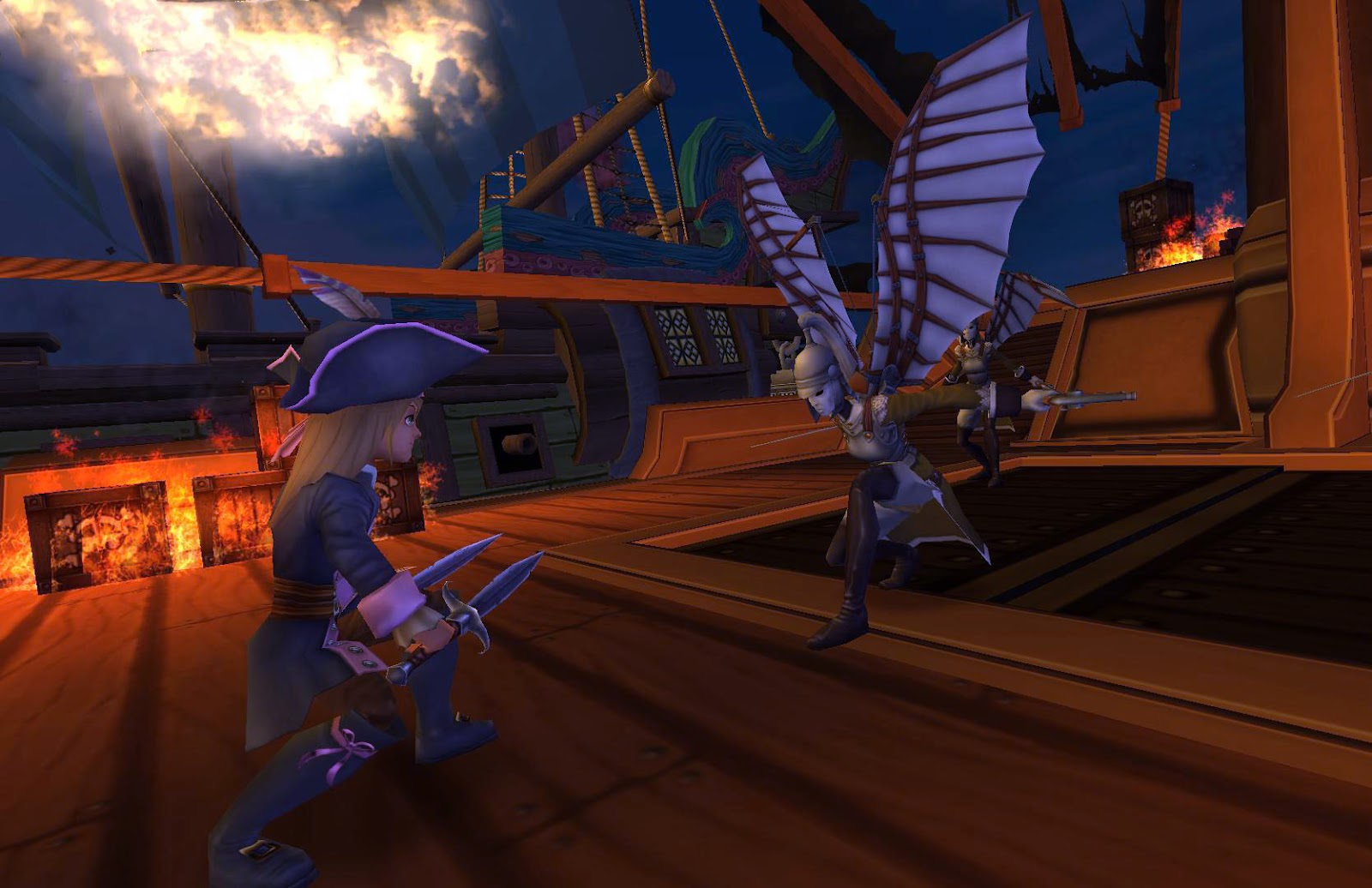 After a volley of pleasantries (Imagine a sarcastic font here), Deacon calls down his Battle Angels to take us back into custody and I get to experience, first hand, what battling pirate style is all about. 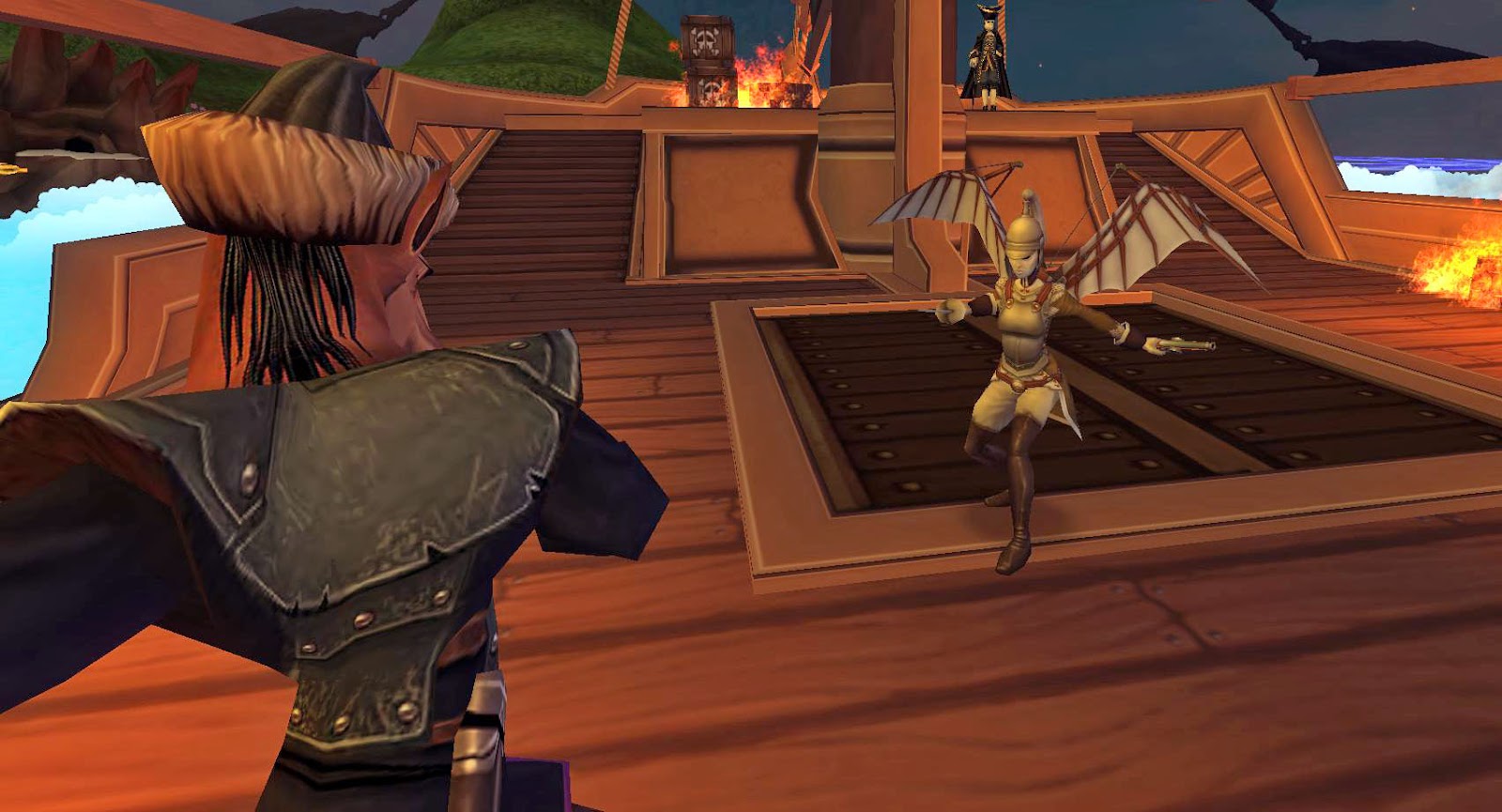 One of the best things about Pirate battles is that your companions or crew join in and you have help to take on your enemies. Subodai shows right away that he is a force to be reckoned with. 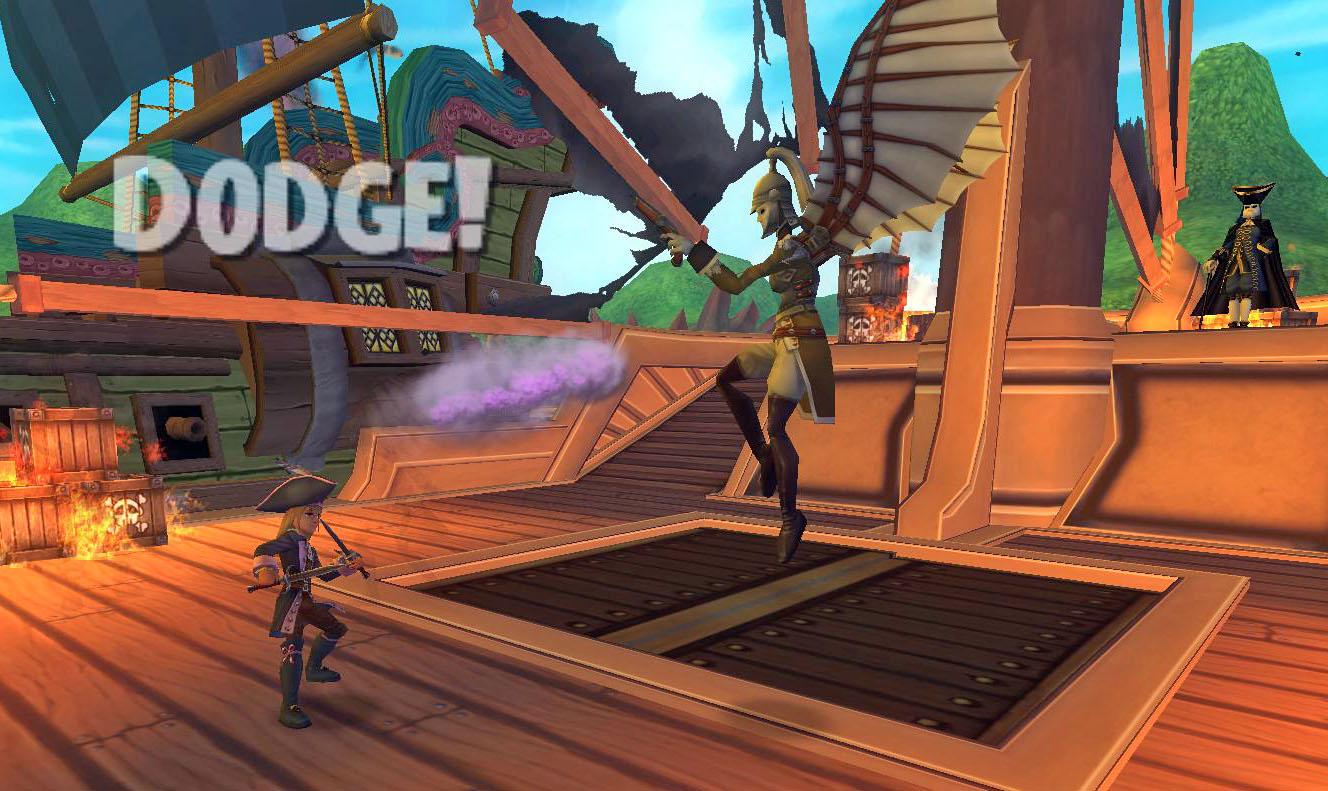 Me, being a Swashbuckler does what Swashbucklers do best and dodges much of the enemies fire. 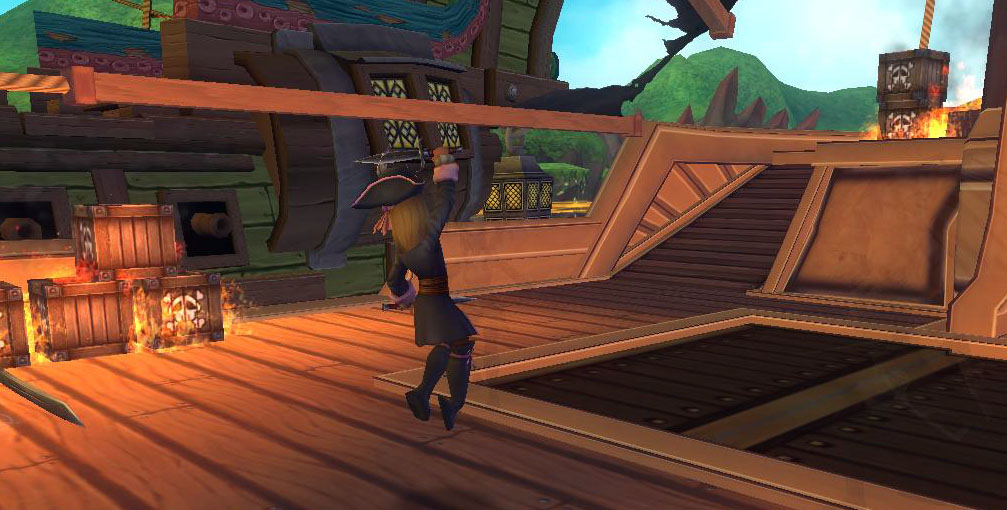 Sure enough, we prevail and I get to experience my first celebratory victory leap. 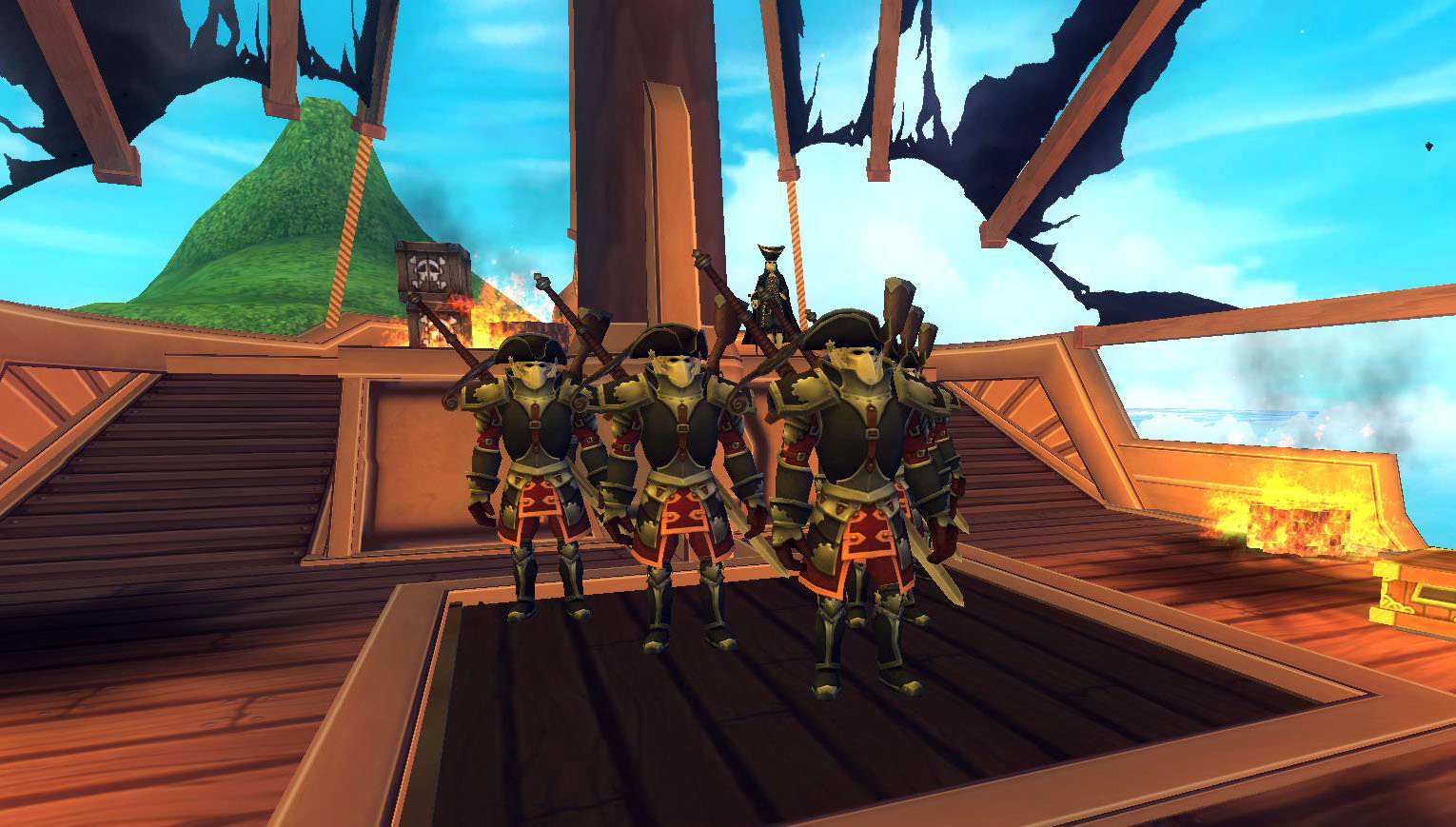 My joy was short lived though.Deacon always has a plan B and before we knew it, a squad of Armada Dragoons came rising out of the lower hold.

Knowing the fierce reputation of said Dragoons I thought I was soon to be back in that horrible cage. What I hadn’t counted on was that Boochbeard was a crafty old fellow and had a plan C to counter Deacon’s plan B. He dramatically shoots up a flare and BOOM!  A well shot Naptha bomb from Boochbeard’s crew sails into them and the Dragoons were reduced to a fiery ball of gears. 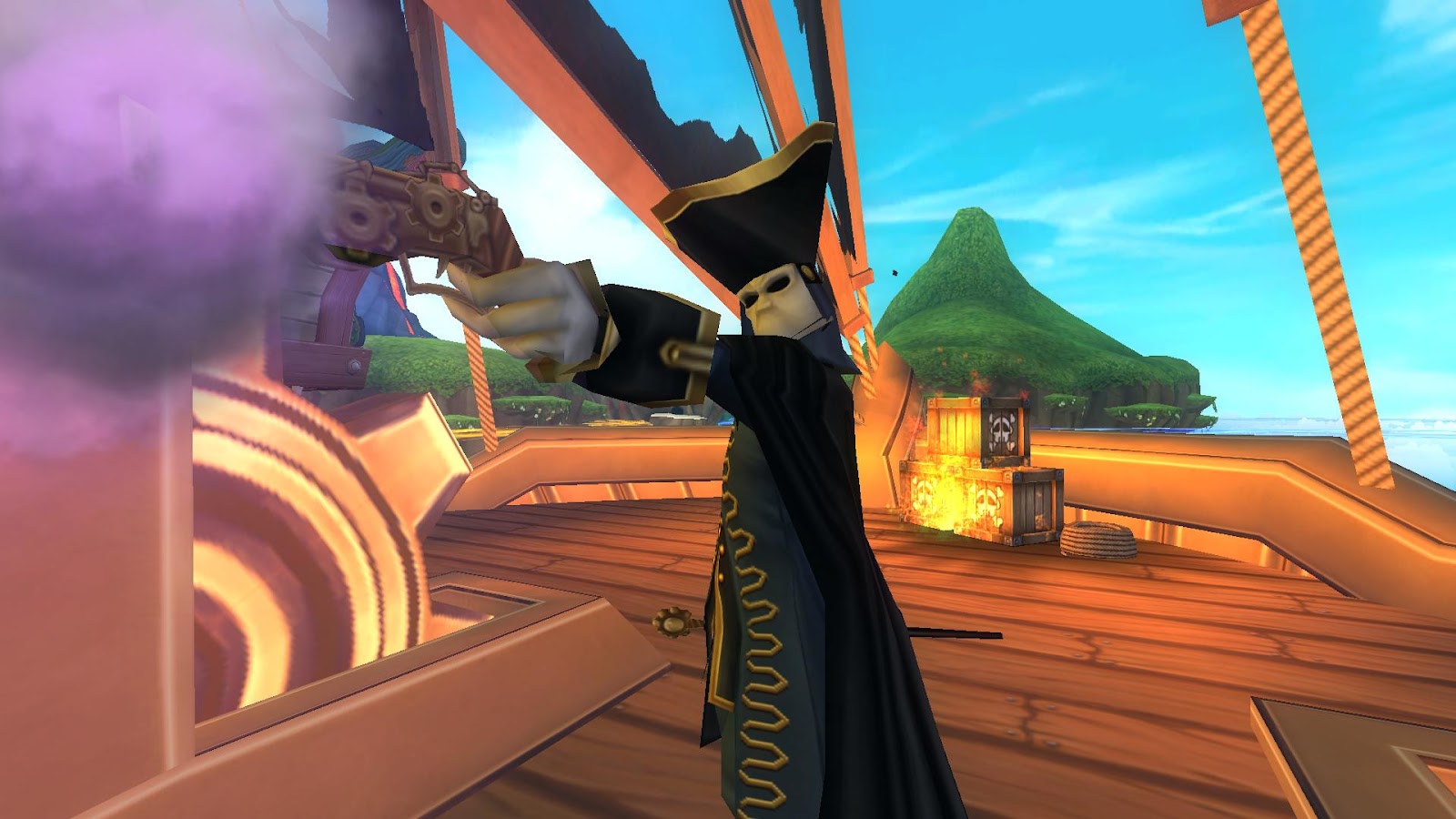 This did not bode well with Deacon and with clicks and whirs of his gears he took out his rage on Boochbeard with a quicker than a snake bite draw and firing of his pistol as he makes his escape to the near by Armada fleet. 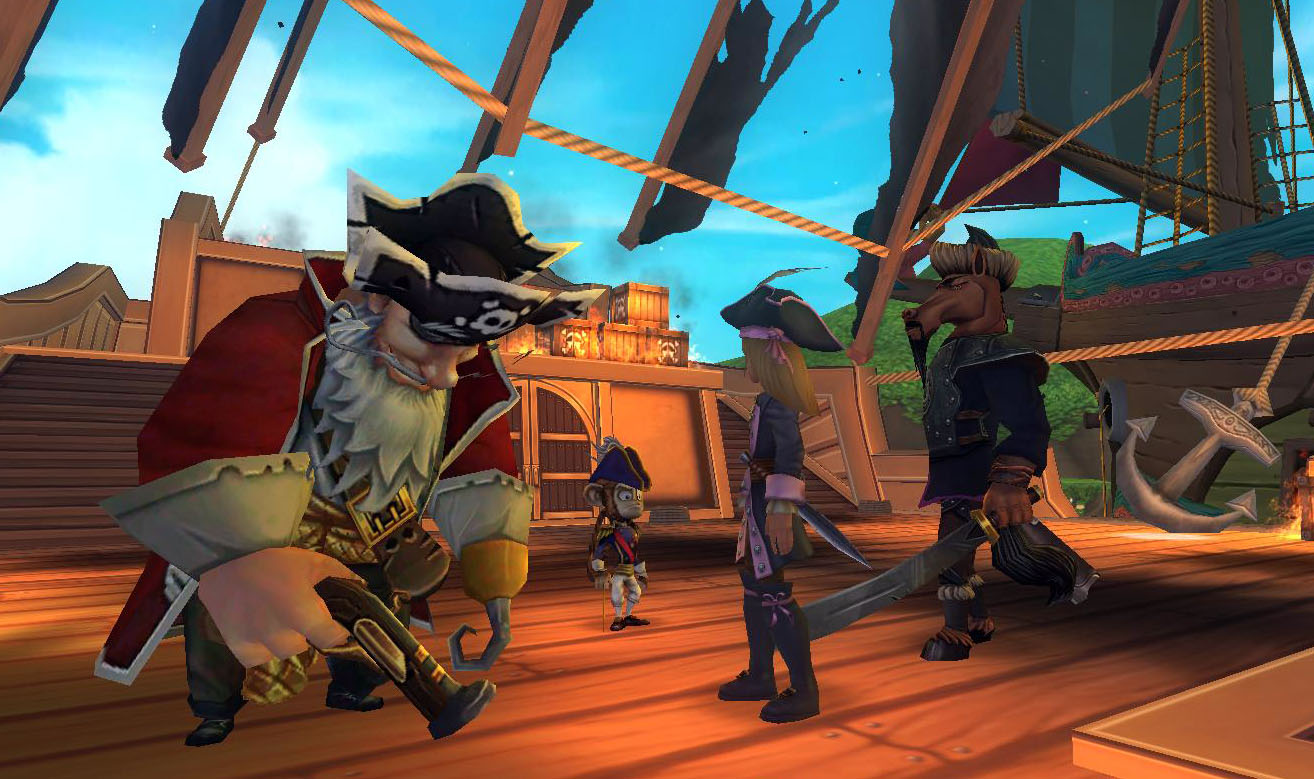 Poor Boochbeard takes a direct hit and the spark shooter throws him backwards several feet and he really got his clock cleaned (yeah, pun intended).

This unexpected turn of events leaves Boochbeard feeling far too weak to continue leading our escape. Knowing that his ship is now without a Captain Boochbeard instructs Gandry to tell his crew that I am to captain his ship for our getaway.  From death row prisoner to Captain in such a short time can test the mettle of any young pirate. 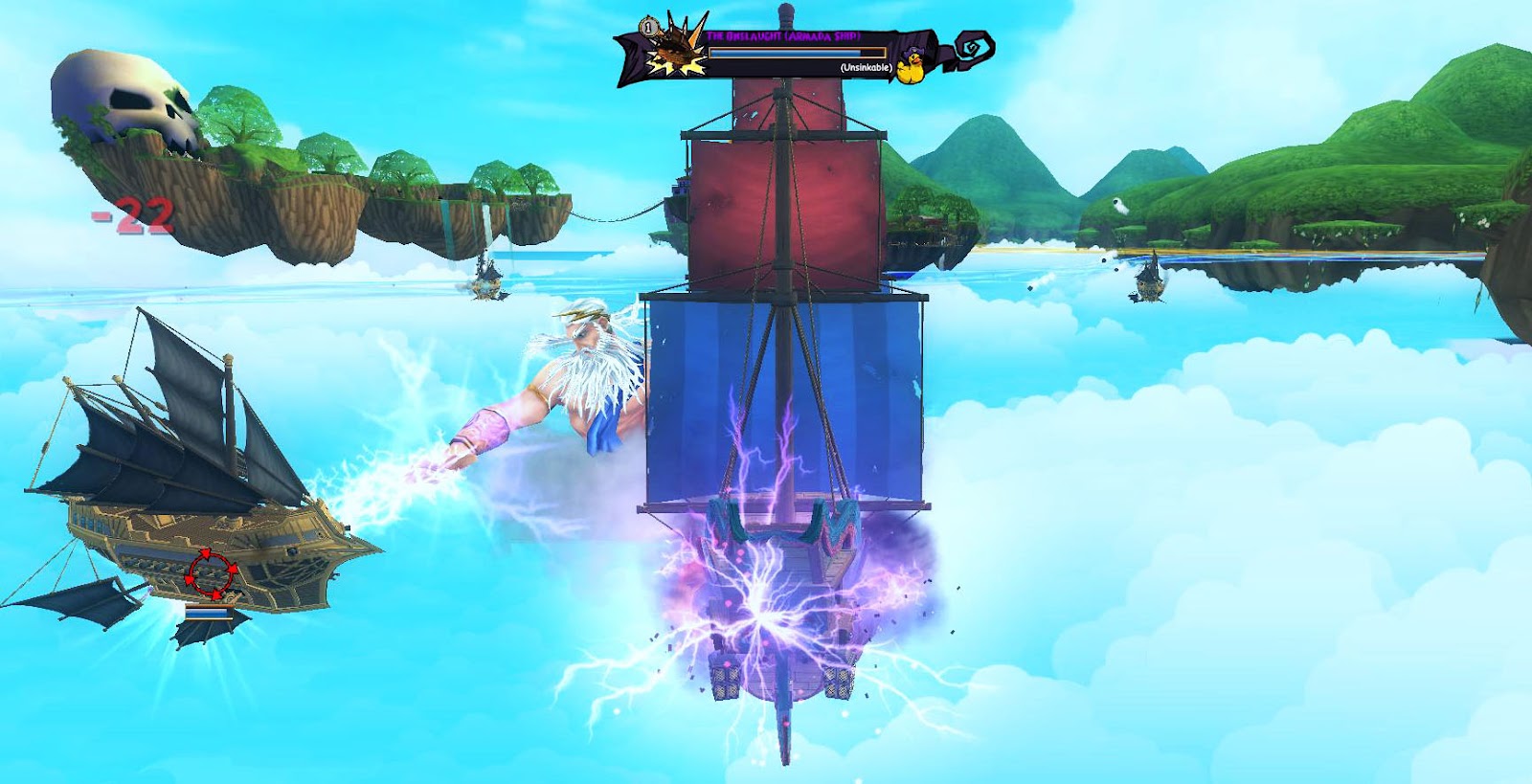 We set sail for the only shelter in site, Skull Island. The only problem is that there is an Armada fleet between us and our sanctuary.   Boochbeard does some fine coaching and I am soon, with energetic assistance from a nearby Storm Lord, blasting my way through the Armada ships in fine piratey style.

The Armada may be the scourge of the Skyways but they are no fools and soon give up the chase with shouted vows to enact their revenge on me some other day. This I can deal with and make my own vows about converting clockworks into harmless timepieces.

And so one adventure ends yet the biggest one begins. This noob pirate has accomplished a lot in a short time and arranging an accord with such an old Captain like Avery will be a piece of cake……………Right? 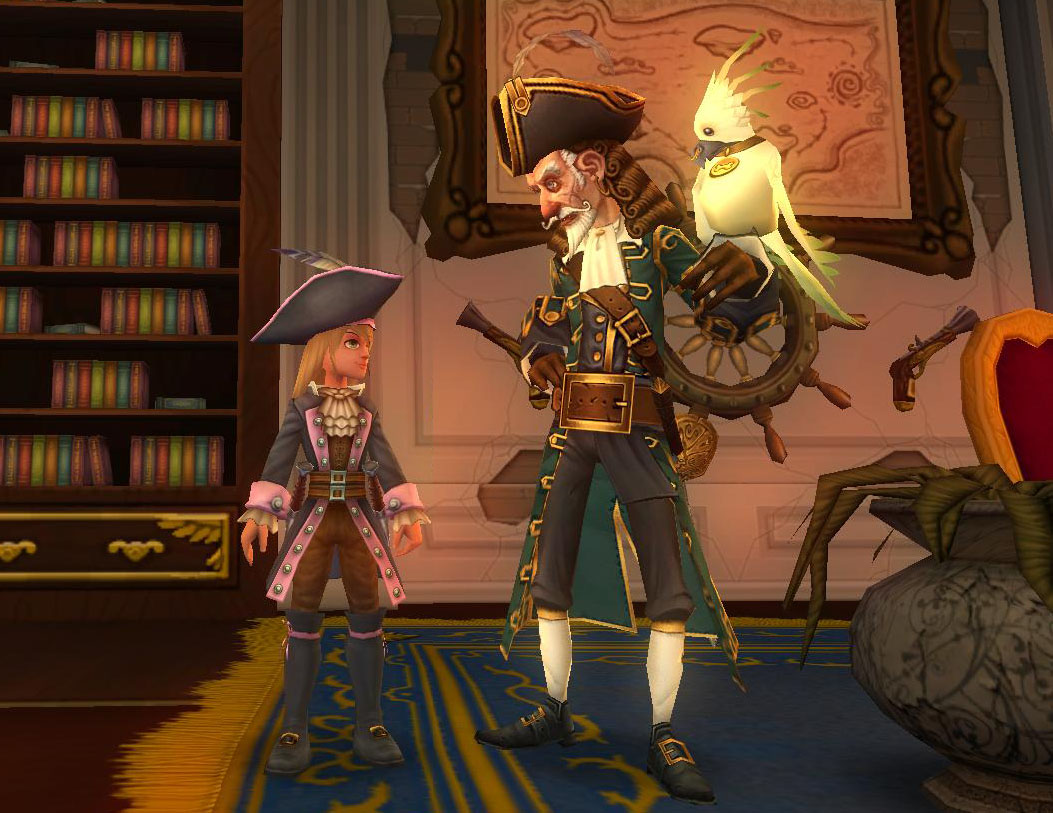 Embracing Your Inner Noob in The Spiral